Introduction: Indonesia as a tropical country is vulnerable to mosquito-borne diseases like dengue fever, chikungunya, and zika by Aedes aegypti mosquito. Various efforts have been made to eradicate mosquitoes, one of which is by fogging. But this method only eradicates adult mosquitoes and its smoke can also have a bad impact for human health. Therefore, a variety of herbal plants began to be used as biolarvacide, including basil plants (Ocimum basilicum).

Methods: This is an experimental research by comparing the lethal effect between concentration and time. In this experiment there were 10 larvas used for each concentration, which were 0,4%, 0,7%, 1,0%, 1,5%, and 2,0%. The lethal effect arising in larval groups is observed every 1 hour in the first 6 hours, and subsequently every 3 hours until 24 hours after exposure.

This work is licensed under a Creative Commons Attribution-ShareAlike 4.0 International License.

Most read articles by the same author(s) 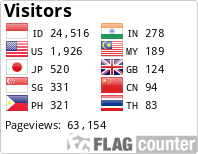 The Journal has been listed and indexed in :

This work is licensed under a Creative Commons Attribution-ShareAlike 4.0 International License.